Two Beautiful Ways that the PSNM Stands out 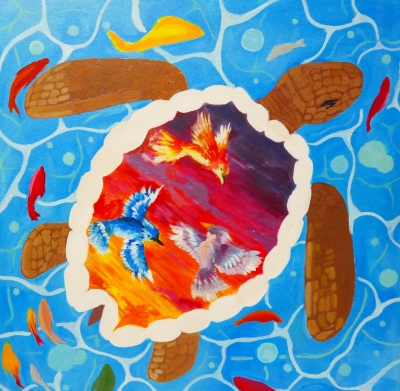 Recently, two exciting news items were announced by Saint-Nom-de-Marie Boarding School (PSNM). The first concerns a successful initiative to improve the emergency area at Sainte-Justine University Hospital Centre. The second refers to their reception of a Level 2 ÉCORESPONSABLE CertificationMC, a first in the French education sector in Quebec.

An inspiring and comforting project

As evidenced by the TVA report and the article on the PSNM website, the initial idea of a young patient Rose-Marie, who is a student at the school, had a positive effect. Rose-Marie shared her thoughts with the hospital’s administration after an experience in a cold, all-white resuscitation room filled with medical instruments. 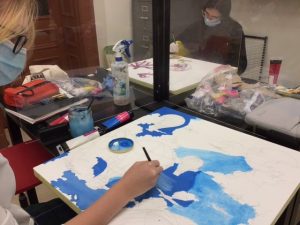 Her idea of making the hospital environment more welcoming, gradually took shape and was eventually presented to Caroline Delcourt, the plastic arts teacher. The students enthusiastically committed themselves to the project of designing and creating 75 frescoes. This project, begun in 2019, has certainly succeeded in counterbalancing the pandemic. 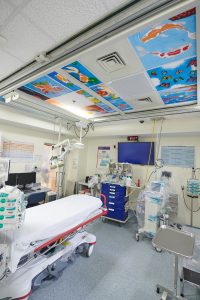 At last, two weeks ago, these frescoes, installed in the rooms and the emergency corridor of Sainte-Justine University Hospital Centre, gave rise to many positive reactions from young patients. This project is a beautiful demonstration of the contribution of the arts to daily life. It also confirms the intuition of the pioneers of the Congregation of the Sisters of the Holy Names of Jesus and Mary (SNJM) who developed a curriculum in which the teaching of the arts was important in order to promote the full development of students.

A firm commitment to sustainable development 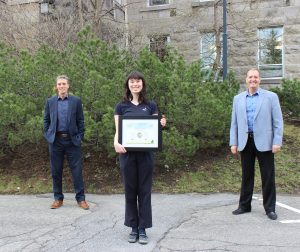 Level 2 ECORESPONSABLEMC Certification – On Earth Day, ÉCOCERT Canada issued and broadcast the awarding of this certificate to Saint-Nom-de-Marie Boarding School, Vincent D’Indy School of Music and Beaubois College. Mr. Benoit Charrette, Quebec’s Minister for the Environment and the Fight against Climate Change highlighted this “first” in Quebec’s education sector.

As the Minister congratulated everyone, he expressed the hope that the approach developed by these three institutions would encourage others in the school system to follow suit. This achievement is the result of the long-term work of the students, faculty and administration of these schools.

In the case of the PSNM, this certification is not an end in itself. Rather, as was pointed out, it is another step in the continuing “process of collective improvement.”

Caption for the photo at the top of the page:  Canvas – created by a student – Photo credit:  PSNM

The embedded links are directed to sources in French only