CATHII at the UN: a project to raise awareness of human trafficking among young people

Eight Quebec university students, who enrolled in the CATHII at the UN project, will participate in the virtual sessions of the 65th conference of the UN Commission on the Status of Women this coming March. They will thus be able to experience major forums for discussion on a variety of topics, especially those related to justice and human trafficking.

This initiative of the Action Committee against Internal and International Human Trafficking (CATHII) was proposed by the Subcommittee on Succession Planning which had been created in February 2019. This subcommittee transformed itself into a project, CATHII at the UN, in August 2019. Its original objectives included a training program for students in preparation for participation in UN sessions. This program aims at raising awareness of the issues and the systemic effects of trafficking on children, women and people in precarious work situations. It counts on CATHII, recognized as a reference resource in Canada, to transmit the knowledge it has acquired on the subject of human trafficking. 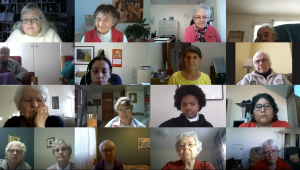 As Élodie Ekobena, co-coordinator of the CATHII at the UN project, pointed out during her presentation at the last meeting of the Quebec SNJM Justice and Peace Committee, interest in the pilot project, which hoped to attract 2 or 3 students in these times of pandemic, quickly grew. No fewer than eight students from all three university levels (Bachelor’s, Master’s and Doctorate) and from four Quebec universities applied. 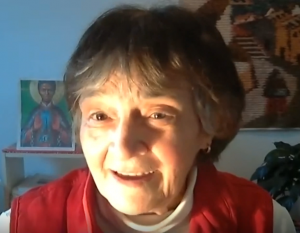 These hopeful participants submitted their CVs along with letters describing their deep motivation. The motivations were “impressive and very touching,” according to Sr. Lise Gagnon, SNJM, co-coordinator of the project. Since then, the young people have participated in several meetings in order to prepare for their experience in March. These young members of CATHII at the UN realized that they also needed to hear about the experiences and knowledge of other youth, some of whom had already experienced Model UN sessions.

These students, who come from culturally diverse backgrounds, work in medicine, social work and international journalism. They are interested in learning more about human trafficking issues and are even considering setting up further more specific projects. This is certainly the case for the medical students who want to develop a program to detect the presence of victims of human trafficking in emergency rooms.

The preparatory meetings with the students will end on February 25. They are being led by Élodie Ekobena, a member of CATHII and a representative of the only male congregation (Jesuits) in the CATHII organization, which was created in 2004 by a group of female religious congregations. Ms. Renaude Grégoire, a self-employed worker who has participated in some thirty sessions at the UN, also contributes to these meetings by sharing her experiences. The committee also counts on contributions from Ms. Jill Hanley, professor at McGill University, Ms. Jennie-Laure Sully, worker at CLES (Concerted Action against Sexual Exploitation) and Ms. France Laforge, coordinator of CATHII.

CATHII’s desire to prepare for its continuation, or at least to promote the transmission of its expertise in order to continue the work of providing information on trafficking, is well underway. The interest of these eight students and the request of certain universities for involvement in a similar project in 2022 seem to confirm this.

Another effect of CATHII’s approach to planning its succession is without doubt a growing awareness of the work carried out for so many years by religious congregations involved within various networks, including Talitha Kum, collaborating in action against human trafficking.

Despite everything, numerous challenges still remain, as Élodie Ekobena expressed very well at the end of her presentation available on the video below (French only).

Conclusion on the presentation