A gift from the Longueuil Symphony Orchestra

Alexandre Da Costa, the conductor of the Longueuil Symphony Orchestra (OSDL), while respecting all the health guidelines, delivered a hundred CDs to Maison Jesus-Marie, in Longueuil, a week before Christmas. 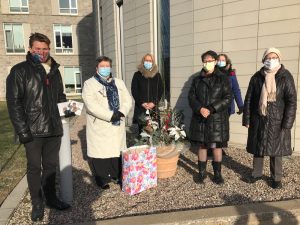 A former student of Vincent d’Indy School of Music founded by the Sisters of the Holy Names of Jesus and Mary (SNJM), Alexandre Da Costa, an internationally renowned violinist, became artistic director and conductor of the OSDL in 2019. Since then, without abandoning his career as a violinist, he has been committed to making classical music accessible to all, while at the same time making the orchestra known and appreciated internationally.

He is the only conductor who travelled during the Quebec health crisis in order to meet people. He believes that “music is an essential need, an eminent good that has endured for centuries and a blessing that defines us as humans.” This vision of things is in direct line with the approach of Mother Marie-Rose and those who followed her.

The OSDL leader’s gesture was greatly appreciated by the Sisters at Maison Jesus-Marie, who have been confined since last March.  It touched the hearts of all, especially the many musicians who had taught at Vincent d’Indy School of Music and other private and public schools where the Congregation worked. 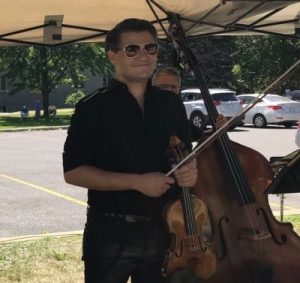 Conductor Da Costa and a few OSDL musicians had given an outdoor concert at MJM last summer. This concert was part of a series of concerts that brought a measure of joy and beauty to the elderly of several South Shore residences during their time of confinement.

The CDs received were distributed amongst the Sisters and the MJM staff by means of a raffle. It was a great way to thank everyone for their commitment since the beginning of the pandemic and to highlight the concern and care offered by the dedicated staff.