SNJM Sisters Have Made History in Rural Communities in Brazil 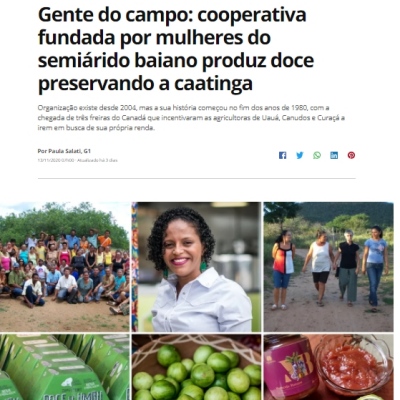 In a recent article published in a regional newspaper and available on the G1-Globo.com web portal, journalist Paula Salati tells the story of an agricultural cooperative and the empowerment of the people of a rural region in Brazil.

Her meeting with a few key people allowed her to go back to the source of the enterprise and the change in mentalities. She thus discovered the influence and contribution of three SNJM Sisters from Quebec who arrived in Brazil in 1986. We present a summary of the article published in Portuguese.

A cooperative founded by women produces sweets while preserving caatinga

The agricultural cooperative was officially founded in 2004. Its foundations date back to the late 1980s with the arrival of three Sisters of the Holy Names of Jesus and Mary (SNJM) of Quebec. They encouraged women and farmers in the semi-arid region of Bahia, particularly Uauá, Canudos and Curacá, to create their own source of income. 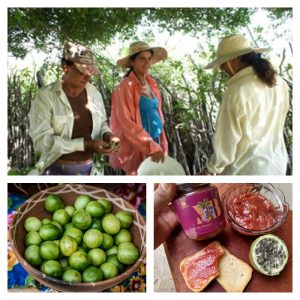 Farm workers during the harvesting of the imbu | Source: Coopercuc

The Cooperativa Agropecuaria Familiar in Canudos, Uauá and Curaçá  (Coopercuc) has since established itself as a resource in organic production of fruits in the caatinga* family, including passion fruit and imbu. The latter is  a flagship product of the cooperative. In addition to the commercial success of this fleshy fruit, it is worth noting the work of the rural communities of Coopercuc, in the preservation and proliferation of the umbezeiro, a Brazilian plum tree that has been on the verge of extinction for a few years.

The cooperative transforms the fruits of the harvest into sweets, jams and pulps that are greatly appreciated by the Brazilian market. Since its participation in the Slow Food agricultural exhibition in Italy, the cooperative has entered into the European market which includes the countries of France, Austria, Italy and more recently, Germany. 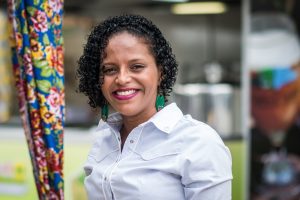 70% of Coopercuc’s 270 family farming members are women. In 2016, Denise Cardoso, at the age of 26, became the first female executive and took over the management of the cooperative.  She tells the story of the cooperative in connection with the changing attitudes of the region and the influence of the Quebec Sisters. 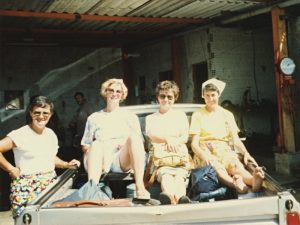 In 1986, change took place with the arrival of the three Canadian Catholic Sisters in the municipality of Bahia, in Uauá. Sisters Monique Fortier, Marthe D’Aoust and Jacqueline Aubry were part of the Faith-Based Communities (CEB), a movement in the Catholic Church that focused on the social and political organization of the poorest populations, especially during military dictatorships.

They forged close relationships with the women and men of Uauá, and later in Canudos and Curacá. Gradually, Sisters Monique, Marthe and Jacqueline began to encourage the women of Uauá to earn a living and to participate in the decisions of the local community, at a time when the presence of women in rural associations and social movements was non-existent. 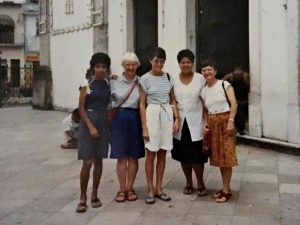 Sr. Marthe D’Aoust (right) with other Sisters during a meeting with women in a church in 1990. | Source: Jussara Dantas Personal Archive

“The Sisters told the women, ‘Look, even at home, you can raise chickens, plant your own garden, harvest umbu and earn your livelihood, so that you don’t have to depend solely on your husbands,’ ” says  Denise  Cardo. The Sisters also organized meetings at the church. “The men thought that the women were going to study the Bible. But, over and above that, the Sisters were preparing a social transformation in the minds of women.”

Denise believes that this foundational work opened the door to the remarkable history of the co-op. “In this sense, when we founded Coopercuc, everybody already understood what socio-activism was and how collective decisions worked.” 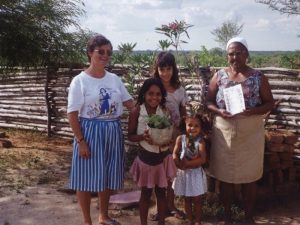 Although Denise, the current co-op president was only two years old when the SNJM’s arrived in her area, she has an unforgettable memory of that time, even though the Sisters left in 1997. The presence of other missionaries who continued working in the same vein helped  to nurture her dream of greater freedom of action and her desire to have a life different from that which her mother had. She remarked, “My  mother, who was frequently with the Sisters, often told me:  ‘My daughter, don’t marry as young as I did. I want you to have a future with studies and a job.’ “

Motivated not to experience the same difficulties as her mother, Denise continued her studies. At 30, she is not married and does not yet have children although her mother, as she says, “was married at 16, because my grandfather wanted her to be safe in life.” 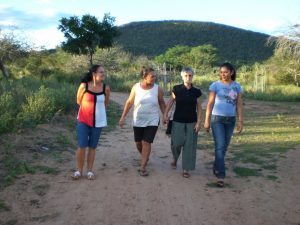 Visit of Sr. Monique Fortier in 2009 to one of the communities in Uauá. Jussara Dantas is on the right (in blue). | Source: Jussara Dantas Personal Archive

The path of another Coopercuc partner, Jussara Dantas, age 39, was also transformed by the SNJM Sisters. She is currently the head of the Municipal Secretariat of Education in Uauá, holds a Master’s degree in semi-arid development, and is a geographer and psycho-pedagogical teacher. “The Sisters allowed me to dream of something else,” says Jussara, whose horizon has been full of possibilities.

In Denise Cardoso’s opinion, the presence of the Sisters not only transformed the lives of women in the region. “The Sisters also worked hard to raise awareness among young boys. Many of them had thought they would leave their communities to work abroad. Instead, they have learned to value their semi-arid environment.”

These two young women have also highlighted another remarkable fact credited to the SNJM Sisters. Before leaving for a new mission in 1997, they had succeeded in being a strong force in motivating and encouraging the people in the three Bahian communities, preparing them for the arrival of organizations that would help them with the production of fruit and the preservation of the caatinga. 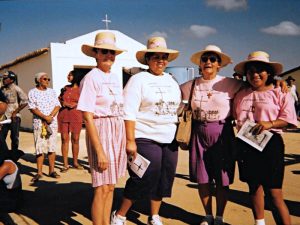 For example, an NGO (Instituto Regional da Pequena Agropecu-ria Apropriaa – IRPAA) set up shop in the region to work with management techniques adapted to the vegetation and climate of the semi-arid region. As early as 1997, women from the three communities received training  from this NGO, regarding the processing of the fruits of the region.

This training has been beneficial as Denise recounts. “My aunts and my mother participated and learned how to make jams and sweets. Following this class, my parents started making sweets at home, put them into jars and took them to street markets. It was the very beginning of the co-op.”

Valuing a semi-arid environment and looking forward to future endeavors

Although the production and marketing of sweets by farmers in a cooperative began in 1997, it was not until 2004 that the cooperative was formalized. During these years, the partners built small processing units in the organization’s 13 rural communities. 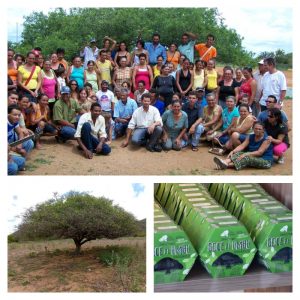 Coopercuc farmers working on the imbu harvest. The umbuzeiro recognized as “the sacred tree of the hinterland”. | Photo sources: Coopercuc and Adilson Ribeiro personal archive

Since 2016, the cooperative no longer benefits from public programs, which had encouraged the purchase of its products for redistribution to people in need of food and those in the public schools. It needs to develop new markets in the private sector, including supermarket chains, for example, and maintain partnerships with NGOs and governments.

In August 2020, Coopercuc exported banana jam with passion fruit to Germany, in partnership with a European company (Toda Vida) that supports sustainable agriculture projects in Brazil. In addition, resources have been invested in the Agrocaatinga project to mainly assist poor farm families and promote the preservation and enhancement of biome*.

The members of the cooperative are also encouraged to diversify their garden by planting various species thereby preserving the caatinga and enhancing the imbu. The latter has also seen an increase in its market value from R$3 for 60 kg in 2003, to more than R$150 today. 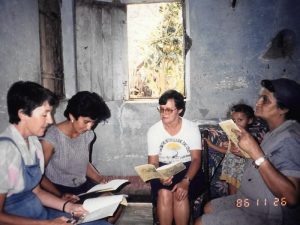 Sisters Jacqueline and Monique during a meeting with community leaders in Uauá. | Source: SNJM Archives

According to Denise, the SNJM Sisters are closely associated with Coopercuc even though they were not involved in the entire construction of the cooperative. “They are the ones who gave the basics of social formation, the notion of political participation and taught us to live with our semi-arid environment… 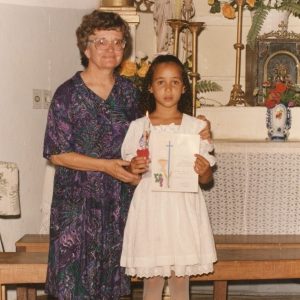 We have former members who, even though retired, do not lose their membership in the co-op. The Sisters have left their mark on our history,” concludes the director of the co-op.

*Caatinga refers to a particular type of vegetation, in this case small thorny trees living seasonally in an ecosystem itself belonging to the desert biome** and bushes of the neotropical ecozone. (Wikipedia source)

**Biome: A biome /ˈbaɪoʊm/ is a large community of plants and animals that occupy a certain region defined by its climate and dominant vegetation.  (Wikipedia source)