Disturbing Facts and Testimonies Regarding the Sexual Exploitation of Underage Girls 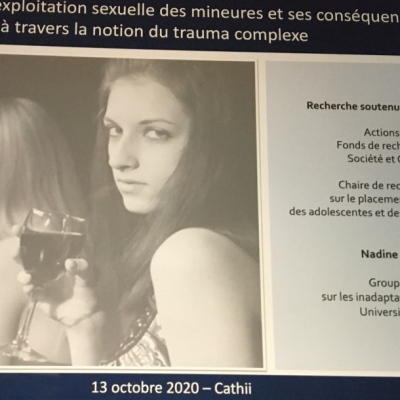 During a virtual conference for members of the Committee for Action against Internal and International Human Trafficking (CATHII) and invited guests, Nadine Lanctôt, PhD,* presented the results of a study conducted in 2016: “The Hidden Face of Prostitution”,** providing a better understanding of the sexual exploitation of minors. She also reported on the consequences of this sexual exploitation through the lens of complex trauma, the theoretical model used for this research. 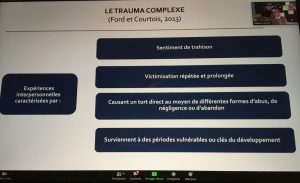 First of all, she highlighted a change implemented since June 2019 that has a direct effect on the perception and management of cases handled according to the administrative protocols of youth protection in Quebec. Thus, instead of labelling a person who has been sexually exploited within the prostitution system as an offender (serious behavioural disorders), we now speak of a victim of sexual assault.

However, even if the change is official, this does not mean that everyone has fully integrated this major distinction. There is, therefore, a great deal of awareness work to be done. This is all the more relevant, as Ms. Lanctôt reminds us, because the results of her research with 125 adolescent girls and women reveal deep wounds that deserve a special approach and enough time to help these victims rebuild their lives.

In some cases, the injuries are so severe that even taking a shower becomes difficult because the relationship with one’s own body has been altered. Can we even imagine the anguished cry of a girl who was gang-raped by eight men and who wanted to “be killed” rather than having to “live with it…”?

The consequences are multiple and affect a number of aspects of the victim’s life. “This person defines herself by her history of victimization,” says Ms. Lanctôt. From considerable psychological distress, to intense anger, to an emotional shutdown and a distaste for life, victims are often struggling with symptoms of post-traumatic stress disorder.

In such circumstances, the speaker spoke of a long process to promote the social reintegration of victims of sexual exploitation. Despite the real difficulties in meeting this challenge, she remains optimistic. “Knowledge is increasingly leading us towards a positive approach to rehabilitation, focusing on the needs, strengths and resources of victims of sexual exploitation rather than on their deficits and the risks they face. Quebec can thus draw inspiration from scientific and social innovations stemming from partnerships between researchers and workers in the field.”

This opens up other avenues of investigation to further explore certain issues that are more relevant to the work in the field so that we can better support victims of sexual exploitation. For example: What are promising practices?  What are the preferred approaches to intervention? What are the factors that facilitate or hinder those who have escaped from sexual exploitation from being trapped in it again?

For CATHII members, the results of the research led by Nadine Lanctôt highlight the serious and lasting consequences affecting young women who have been sexually exploited in the prostitution system. They validate the neo-abolitionist position adopted by the organization.

Discover the web series “The hidden faces of prostitution”.   (in French only)

**The full title of the 2016 study: The Hidden Face of Prostitution: A Study of the Impact of Prostitution on the Development and Well-Being of Girls and Women