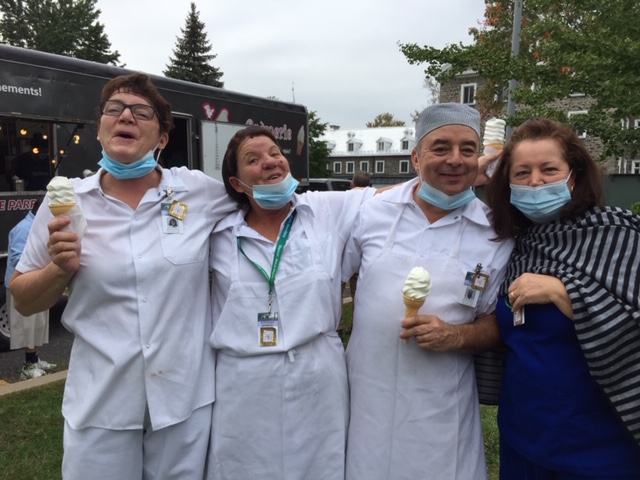 The employees of Maison Jésus-Marie (MJM) are now benefitting from an official recognition program, which will be held annually. Its unveiling took place in a very pleasant setting, outdoors, under a tent, during a Bar-B-Q lunch and at various times to accommodate the schedules of all the staff. This tent facilitated meeting one another in smaller groups.

The MJM staff recognition program is the result of a process undertaken last year and ratified by the members of the Board of Directors in December 2019. However, the final preparations for this event and its active presentation were delayed by the pandemic.

The process made it possible to complete and update all the various policies (human resources, ethics, equity, etc.). It also provides for the recognition and celebration of the seniority of staff members.

The program that has been put in place is intended to highlight seniority and to foster the culture of recognition, already visible in the many small gestures of gratitude offered on a regular basis and even spontaneously, at times, as was the case throughout the spring COVID-19 confinement. The program recognizes years of seniority in five-year increments (5, 10, 15, 20, 25 years, etc.) 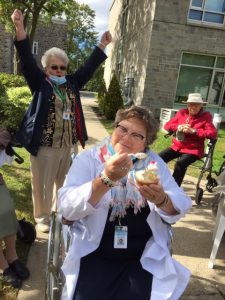 Ms. Geneviève Grégoire, Executive Director, with Sr. Monique Gendron, relaxing in the background, following the official unveiling of the program

As part of the official unveiling of the program, employees received an information package, containing the updated documents and policies. Since it was the first year of the program, anyone with more than 30 years of service was honored and offered a gift card along with those celebrating 5, 10, 15, 20, 25 and 30 years of service.  “We also included those who would be celebrating a special anniversary year in a few months,” says Ms. Grégoire. Next year and henceforth, only employees celebrating anniversary years, in 5-year increments will be honored and presented a gift card and special greetings.

The Sisters at Maison Jésus-Marie were able to attend one or other of these small festive gatherings and enjoyed a little “treat” since the organizers had planned to have an “ice cream truck” on the premises.

Judging by the cheerful faces of the participants and staff members, the unveiling and the “extras” were well appreciated! 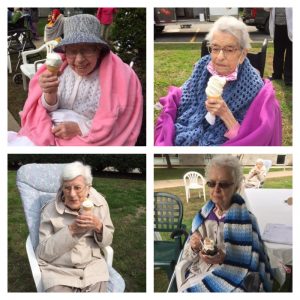