A work plan and an action plan will be presented on September 9 to members of the Quebec Coordination of the World March of Women (CQMMF) to highlight the demands proposed by this large-scale demonstration, despite its postponement.

“Just because we won’t be marching doesn’t mean we don’t exist,” notes a working paper highlighting the importance of mobilizing and making known the five demands of this 5th edition of the World March of Women. This event was scheduled for October 17th in the Lanaudière region of Quebec. Some 10,000 participants were expected to attend. Due to the pandemic, the organization chose to postpone the march to a later date.

Beyond the adjustments made to the various tools for popular education, we can expect various public actions including undoubtedly a national support campaign and many local and regional activities reflecting the reality of the various areas. Due to the Pandemic, one can expect a number of virtual activities. 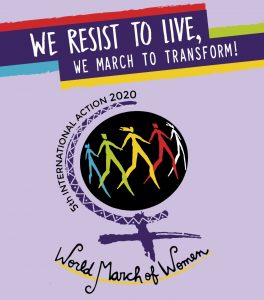 Being unable to guarantee a safe “face to face” event, the International Committee of the World March of Women, bringing together representatives from all regions, has opted to organize a large-scale virtual event.

Building on the analytical work done over the past several years, the plan is to denounce transnational corporations and integrate migration issues into the program. Some actions are expected to take place throughout the week of October 12-17, including the presentation of a pilot project from the feminist school on a virtual platform and the distribution of documents and videos analyzing various situations with proposals of alternatives.

A 24-hour feminist solidarity action is also planned for 17 October. It will be virtual but also in outdoor public areas, if possible, in order to focus on the WMW’s sustainability of life agenda based on the analyses of feminist economics.

A series of online videos

As part of this 5th edition of the World March of Women, the theme of which is “We resist to live, we walk to transform”, a book and a series of three videos have been made and were recently launched.

Available for free online in Portuguese and Spanish at the moment, the book highlights the role of transnational companies in precarious and digitized work. It addresses various themes including the exploitation of nature, the commercialization of feminism and the intensification of international, sexual and racial divisions and discrepancies in the workplace.

The video capsules  demystify  the functioning of corporate power in three particular sectors while presenting alternative feminist proposals. They are available in English, French, Portuguese and Spanish. 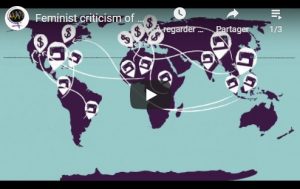 For more details on this “Critical” initiative

Learn more about the World March of Women