25 years later: A Nod to the SNJM’s Experience at the March of Bread and Roses 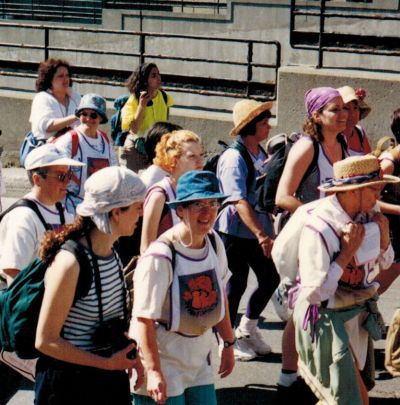 Twenty-five years ago, a large demonstration brought together several hundred women from all over Quebec who marched 200 kilometers to defend women’s rights. This Bread and Roses march was a turning point in the history of the struggles, resistance, and affirmation of women. It was also the inspiration for the World March of Women, which has been held every five years since 2000. 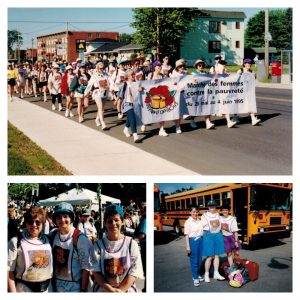 Like Françoise David, the initiator of the 1995 event, Sr. Lise Gagnon and Sr. Claudette Bastien have lasting memories of this epic march. “25 years have already gone by! Quite an adventure to be celebrated with unforgettable memories… and yet, the same issues exist today regarding minimum wage, work done in the education and health sectors and in the welcoming of immigrants,” says Sr. Lise Gagnon, who is the only SNJM Sister to have completed the entire 200-kilometer journey.

Demands that are still relevant today

While enthusiastic about this experience and the need to continue the struggle by participating in subsequent marches, she admits that “the road is hard and will be long…” to achieve equality and the recognition of women’s rights. She was very moved by the testimony of a woman living in an eight-unit apartment block in Montreal-North where six immigrant women worked as orderlies.

“Many people in this impoverished area of Montreal are generously working in CHSLDs (Long-term care facilities). With the drama of COVID-19, I think we are beginning to realize more fully what the work of these orderlies represents.” Sr. Lise remains positive, while hoping that this recognition will not be forgotten. “Let’s not give up! It’s going to be okay!!!!”

For her part, Sr. Claudette Bastien, remembers her two days of walking, one of which was entirely in the rain. “A Iovely lady welcomed Lise Gagnon and me into her home, where she dried our clothes and our soggy walking shoes. Claudette recalls: “The organization of this walk included a lot of singing, great enthusiasm, and a spirit of solidarity. All of this, as well as the encouragement from the people who welcomed the participants in the towns and villages or who passed them on the street while honking their horns, had a stimulating effect on the walkers. 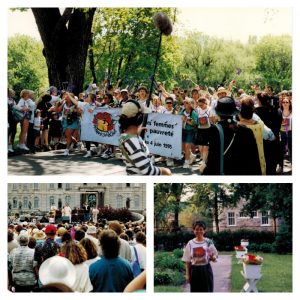 “We were amazed by the generosity of those who welcomed us at the rally points and in their homes.” While recalling the joy of arriving and being cheered on by thousands of people in Quebec City, Sr. Claudette also mentions the anxiety experienced by the walkers who hoped that their demands to the government would be met positively.

There was great disappointment with the government’s response to the demand for an increase in the minimum wage, which increased by $0.45 that year and “in dribs and drabs after that.”

Nevertheless, the participants agreed that the march had been necessary. For far more important than the vivid memories of the song Bread and Roses which still bring tears to their eyes, real progress was made and the march has served as a model to launch the movement worldwide. 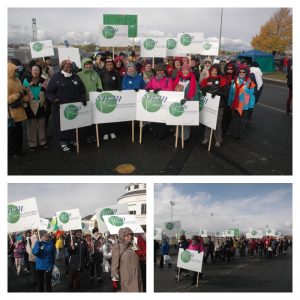 Let us recall that the 1995 march lasted ten days. In addition to Sr. Lise who walked the full ten days, this relay walk brought together four other SNJM Sisters and a friend of the Congregation who each walked for two days. The march ended on June 4, in front of the National Assembly in Quebec City.

To learn more about this event, read the following two articles that provide an enlightening look back at this Quebec initiative.

Plus de pain plus de roses