SNJM Sisters at the Time of the Spanish Flu (1918) 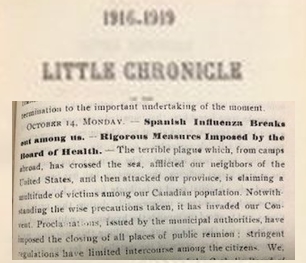 Some 100 years ago, the world was living through a trying pandemic: the “Spanish Flu” transmitted by troops of soldiers returning from the war in Siberia. The toll on our country was heavy, with about 50, 000 victims in the whole of Canada, including more than 14, 000 in Quebec. Municipal and provincial authorities imposed restrictions by prohibiting public gatherings, isolating the sick, closing churches, and restricting outings. However, these measures were not very effective.

Today, as we face the global coronavirus pandemic (Covid-19), it is interesting to look back at the social participation of SNJM Sisters at the time of the Spanish crisis. The 1918-1919 “Little Chronicles” of the Motherhouse at Hochelaga Convent (October – November, 1918) will serve as a guide. 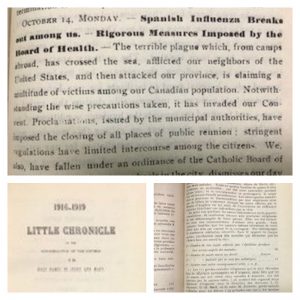 “The Great Killer” Enters the Convent

October 13, 1918 is a fateful date at Hochelaga Convent. Four students have become infected. We have increased hygienic measures in order to prevent the spread of the disease. For the time being, boarders are continuing their classes but there are stricter regulations for ventilation, the disinfecting of rooms, etc.

October 20, 1918 – Thirty students are now under the care of the doctor. The reception hall has been transformed into a hospital for infected boarders. In the community, approximately twenty Sisters, whether professed, novices, or postulants, have also been infected. They will be isolated from the rest of the personnel. “The Sisters are conforming to the directives of the Catholic School Committee. Schools have been closed, and our day students as well as boarders have been sent home. Visitors are no longer allowed in the house.”

Religious authorities worked in collaboration with civil authorities. The Archbishop of Montreal, Most Reverend Paul Bruchési, appealed to both male and female religious communities. The Superior General at the time, Mother Marie de Bon-Secours, was requested to ask the Community to lend a helping hand at various hospitals: Hôtel-Dieu, Notre-Dame, and other emergency hospitals that had been set up. The convent became a central hub where requests from all corners of Montreal were sent. Bishop Bruchési also asked for help for those unable to provide the necessary care for members of their families. Several Sisters also offered their services to the Health Department.

A report submitted to the Catholic Society for Protection and Information states that there were 111 Sisters who worked full time in hospitals and 181 home visitors for 1623 patients. Two emergency hospitals were under the direction of a doctor and a qualified Sister. A food service was organized in the emergency hospital established in our Saint-Clément School in Viauville. Detained in Quebec, the Provincial Superior of Manitoba, Sister Marie-Médard, helped to implement this particular project.

An overview of other services offered shows the nursing assistants keeping watch over the sick at night, keeping watch with the Sisters of Providence during the day, burying the deceased, cleaning various premises, feeding and administering medications, washing clothing and bedding, etc.

Twenty-six Sisters were affected by the illness, but the report notes that none of them died as a result of working with the sick. However, during the time of the pandemic, three Sisters who did die had to be buried outside the community’s burial grounds: Sr. Marie-Radegonde in Verchères; Sr. Charles-Eugène in Epiphany; and Sr. Marie-Azarius in Viauville.

Light at the End of the Tunnel 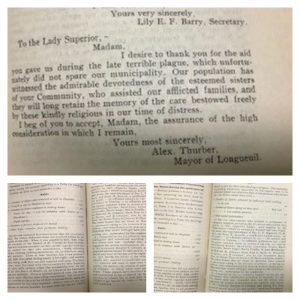 November 10 marked the re-opening of churches. Classes initially resumed in the public schools, then at our boarding school on the 18th. And so the Sisters returned to their primary mission as teachers. The Community received many expressions of gratitude for the help they had offered to the public. Anxious to inspire the students, Bishop Bruchési described the dedication of their educators as “heroic”. The Sisters of Hôtel-Dieu spoke of their “kind collaboration”. “Your hospital volunteers showed outstanding enthusiasm and devotion,” they wrote. On November 30, the “Little Chronicles” noted: “We have been honoured, in newspapers of all faiths, as they praised our devotion during the epidemic that swept across the country.”

There is a great similarity between the two pandemics mentioned. However we can rejoice in the progress that has been made over the years. The governments of Quebec and Canada are now better equipped to assume their responsibilities in the areas of health and social services. They are managing the crisis with the aim of “saving lives”.

Because almost all Quebec SNJM Sisters are now over 70 years of age, their solidarity with society is taking the form of following the government guidelines regarding social distancing, confinement and isolation. In this way they are helping to “save lives” even as they find creative ways of supporting people with telephone calls, messages by mail or   e-mail, and especially with their prayers.