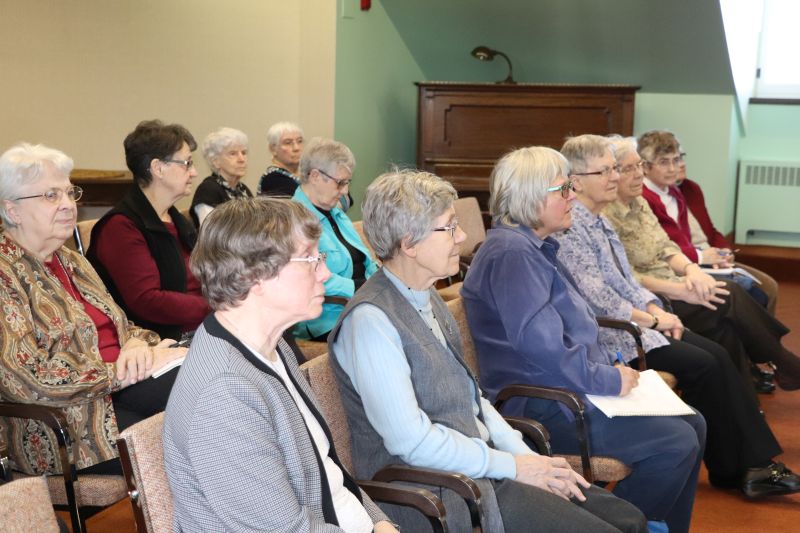 An open meeting, sponsored by the Quebec SNJM Justice and Peace Committee and held in Longueuil last April, was greatly appreciated by the SNJM Sisters and Associates in attendance.

Ms. France Laforge, Coordinator of CATHII (Action Committee against Internal and International Human Trafficking), used concrete examples to illustrate the strong sense of collaboration that has developed, through the years, between organizations working to find and support victims of human trafficking. She noted, “Examples such as these give meaning to my work and affirm the relevance of our organization.”

She recalled the mission of CATHII, founded fifteen years ago by faith groups and religious communities, including SNJM’s. Dedicated primarily to research, consciousness raising, and education on internal and international human trafficking, the organization established the Quebec Coalition against Human Trafficking in order to provide direct services to victims.

During her presentation, Ms. Laforge highlighted important milestones experienced by the organization that tackles the issues of sexual exploitation and forced labor, two forms of modern slavery. She noted that finding ways to intervene directly with survivors of trafficking offered strong motivation for the creation of the Coalition in 2013.

Ms. Carmen Fontaine, Coordinator of the Quebec Coalition against Human Trafficking, stressed the objectives set by the organization: to improve the identification and protection of victims, to ensure adequate support, to promote awareness of the issues surrounding trafficking, and to improve collaboration at the level of existing resources and services.

She also spoke of the organization’s guiding principles which recognize that human trafficking is a serious violation of human rights and an affront to people’s dignity. She explained that the overall approach favored by the Coalition revolves around four P’s: prevention, protection, prosecution and partnership.

The goal is simple: develop trusting relationships to foster close collaboration and coordination among the various actors to better assist victims.